Oscar Henriksson is the main hope of the Swedish table hockey nowadays. He managed to win the World Championship medal for Sweden in open category after 10 long years (last one was in 2007).

What goals does Oscar have now? Where does he spend more time: in the gym or table hockey practice? How many hours he spent to make a genius movie from the Swedish Masters opening ceremony? Does he like or not when people compare him with a machine? Read about this and about many other things in our new interview with Henriksson, Jr.!

Oscar, at the last two big tournaments, Swedish Masters and Riga Open, you lost to Zakharov and Litvinyuk already in the first stages of the play-offs. Guess you expected another results? How can you explain this?

The second day in Riga was hard for me, I wasn’t really mentally ready and for some reason, I didn’t believe in myself in any of game that day. That was the main reason but of course, Litvinyuk also played better then I thought. I have analyzed what went wrong and I will bring that whit me.

And what about your lost to Alexey Zakharov?

Against Zakharov in Swedish Masters I knew it would be tight witch it also was, the two first games I lost in overtime so it felt like it could have gone either way. Also, I have just played against Zakharov in a few games so I wasn’t used to his game style. I have a plan about how to play against him in the future… Even if it could have gone better for me, I’m still glad that I could handle the games in a good way (in my opinion the games was too slippery).

I agree about too slippery games, but what was the reason in your opinion? You were the one who helped to prepare games on Saturday…

This season, the games have been terrible and so the organizers have used more silicon then usually, but also people who are not organizing have asked for silicon to put on the center and stuff. I believe that some of those people are not as carefully as you need to be when you prepare a game. If one puck gets any silicon, it’s too late…

Let’s back to your best of 7 against Zakharov. After this game Alexey compared your moves with a big machine smashing to the game, do you like such comparison or not really?

Haha! Maxim also told me that the players from Russia compare me to a machine. I guess I just think it is funny. When I started to play, Oleg Dmitrichenko became the world champion and of course I wanted to play like he did. Also, Oleg gave me one tip when I played with him at Helsinki Open 2011 and he told me to play with more power. Maybe Oleg is the main reason then. But actually, I have never noticed that I play harder then Caics or Silis for example but of course, compare to Alexey and his smooth game style I might play like a machine…

Maybe you didn’t notice this since you use to be much bigger nowadays? Tell us the truth, what was the reason why you gain weight so quickly? Gym? Food? Steroids?

Haha! Thank you. Of course no steroids! I am spending much time in the gym and during the winter I eat a lot more to gain muscles and before the summer I’m going on a diet to lose the fat that comes during the winter.

All right. What is your result in bench press?

My personal best in the bench press is 120kg which is not very impressive.

What is your important for you – gym or table hockey?

It is a hard question to answer! I’m spending much more time in the gym and that makes me feel happy. Without the gym, I would probably not be the same glad person as I am today so in that point of view, the gym is more important for me.

What’s your father Lasse told you after SM? Last years he is not playing so many tournaments, but there he finished higher than you!

He said congratulations for being the second best Swedish player, haha! He played very well during the Swedish Masters and I think that was important for him to show that also he can still get good results.

Do you remember the moment when your father told you about table hockey and showed you the game for the first time? Have you interested in table hockey before you came to your first tournament?

Actually, my father never really talked about table hockey with me. I always knew that he had been the Swedish Champion back in the days but not more than that. We have always had a Table hockey in my room so one night I wanted Lasse to show me some moves and after that, I wanted to become a table hockey player. I wanted to play a tournament directly but my dad told me to wait for a while and see if my interest stayed. One year later after some practice, I still wanted to play and then we played our first tournament together (Swedsih Masters 2011).

Do you remember when you first time beat Lasse?

In the beginning, my father played without his goalkeeper and also he gave me the puck all the time so in the beginning, he let me win against him. Step by step he increased his level and he told me that he played for 40% of his capability and after a while 50%, 60%, 70% and so on. I don’t know when I won against him for real but I think he is trying his best nowadays at least, haha. 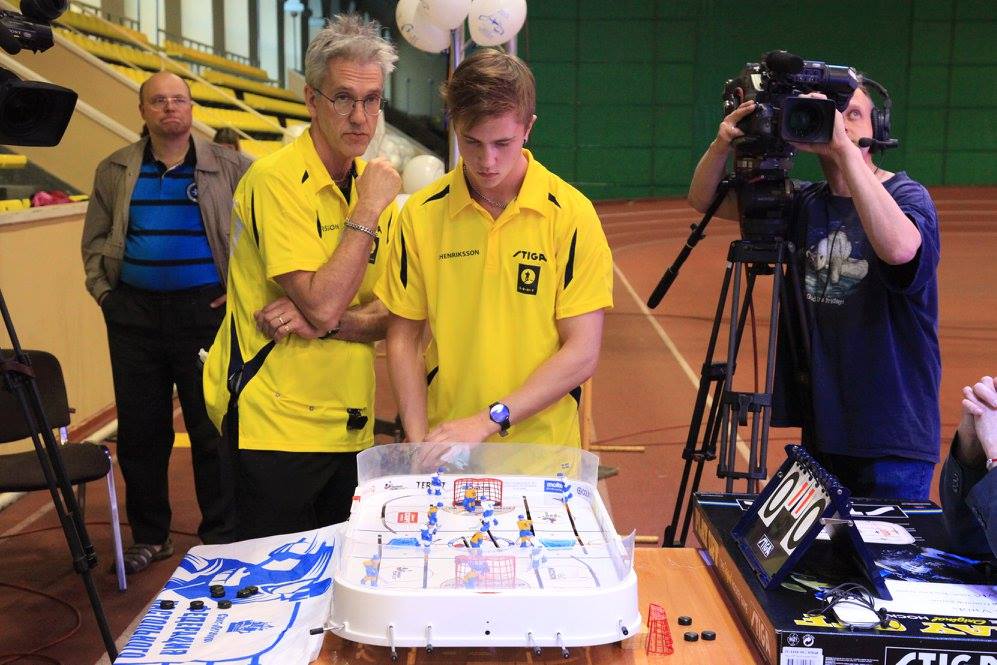 Did you have any thoughts to quit table hockey at the beginning of your career?

I never wanted to quit in the beginning. It was so funny and felt that I was developing my game and I got better results all the time. I guess that was my motivation.

How often do you practice nowadays? Do you play games with Lasse?

Most often I start to practice two weeks before an important tournament. And also I play games with Lasse when we both have the time.

When you meet your father at tournaments, do you play seriously or use to write a draw for example?

We always play but for some reason, it often become aa tie.

You create the coolest video about Fidde «Balboa» Hansson. Was that his or your idea? How much time did you spend to make the video?

In December I asked Fidde if he wanted me to help him with something before the Swedish Masters and he asked me if I wanted to create a movie. After that, both of us wanted to do a parody of the Rocky movies. We wanted the crowd to laugh but also we wanted them to feel inspired! I don’t know how many hours I spended to make it but I started at the beginning of December and everything was finished at the end of January.

The first reason why I stopped upload videos on my youtube channel was that my computer became broken. All the matches I was going to upload then disappeared. But the main reason why I stopped was that it took so much time. Right now I just help people if they want me to make a movie, like the Swedish Masters movie for example.

You had a great success at Wch in Liberec winning gold in juniors and bronze in open category. Which one was more important for you?

I really liked them both but I think I like the bronze in the open category even more.

Don’t you regret about anything in the semifinal where you were pretty close to beat Edgars Caics?

Of course I could have done some things differently. I played too bad at the beginning of the series and after watching the matches I notice some mistakes in my game… As I mentioned before, I have to work even more on the mental part, I have developed it but I have to believe in myself even more. 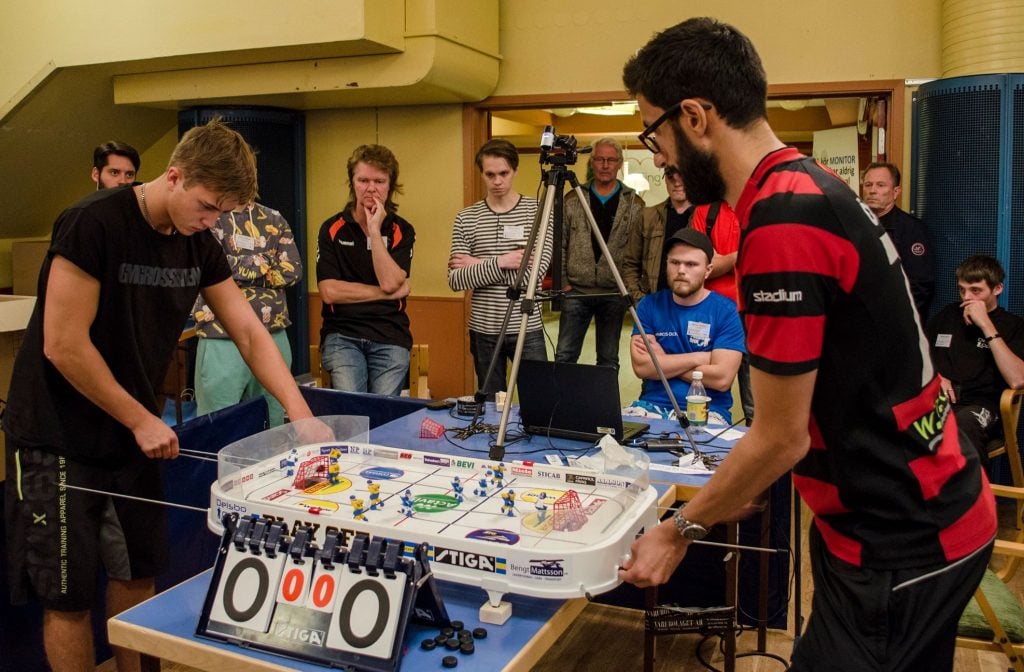 What are your goals in th at the moment?

My main goal right now is to become top-5 at the world ranking.

Who are your best friends in table hockey community?

I have many good friends in the table hockey community but my best friends are Anton Jalneskoog, Axel Lundström and of course also Martin Lundén and Markus Nilsson from Sweden. Last years I have started to know more people from different countries which is really fun!

Where are you studying?

I am studying the last year at the High school in Piteå.

Where do you plan to study after school? Maybe you have some dream place to live or study at least?

I don’t know if I have any dream place to live in but I am going to go study in Umeå soon. It is a nice city and I’m looking forward to that.

Pitea and Umea are both very north cities. So you like such climate and not dream about Spain or Cambodia perhaps like Ahti Lampi?

Umeå is a nice city and it is not very far from home, which is one of the main factors for me to study over there. The climate is not a problem for me. I really want to live in Sweden, I don’t really know why but I guess, to live in another country is too far away from my comfort zone.