Yanis Galuzo talked to Fidde Hansson, a member of Swedish table hockey team, the main organizer of the upcoming Swedish Masters, the owner of a bar in Gothenburg and the happy father of two children.

Fidde, you’re quite a new person in a table hockey world, so not everyone knows you well. Please tell us something about yourself.

Although my given name is Fredrik that is only really used by my mother and my fiancé in moments of anger. For everyone else I am simply known as Fidde. Although how that nick name came to be is unfortunately lost to me in the mists of time.
I was born in Scania in southern Sweden, but my parents promptly corrected that mistake and moved to Mölndal just outside of Gothenburg when I was three years old. Just a little while later my parents tried to give me a sibling.

This they failed because they gave me not two but three at the same time. Yes, they had triplets! Usually the firstborn will struggle to learn to share the parental affection in any way, now imagine how much I suddenly had to fight for attention. This was likely pivotal in moulding me into the competitive person I today. 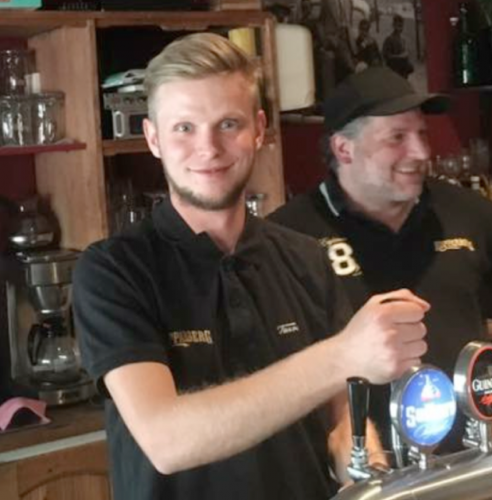 Fidde is keeping a low profile in the background, as always

How difficult is it to be an owner of a bar?

Since I had worked in the restaurant business my whole adult life in different restaurants once I got the opportunity it was just natural to become an owner of the establishment where I was working. The favourite part of my work by far is interacting with the customers. You get all kinds of life stories when tending a bar! Sometimes you need to listen to sad stories and sometimes you can enjoy the atmosphere of your customers happiness.

I would say that my work is mostly quite enjoyable apart from the, fortunately rare, bad customer that needs to be turned away in an appropriate manner.

What’s interesting happens in your bar?

Something that definitely deserves a mention is last summer when I had the honour of having Edgars Caics, his girlfrien Diana and Atis Silis come to Gothenburg and do a week as guest bartenders. This turned out to be quite a success and we are planning for a repeat this summer.

You are not the only owner of the bar, right?

Out of the three owners of the bar, Markus “Mackan” Bengtsson and me are table hockey fanatics leading the third partner, poor Clas, to complain at times at the 90+ table hockey games we keep in storage in the back room. On the other hand, he is an Arsenal fan, so I would argue it is about even!

And which team is your favourite?

I’m for Manchester United. Just like my colleague Markus as well.

How and when did you start to play table hockey?

We had a table hockey kit lying around at the bar that we would bring out from time to time to play some games at. Back in the summer of 2014 we had brought it out onto the sidewalk outside the bar because it was too hot to play inside.

At one point we were approached by a guy that introduced himself as Marko Säkkinen and told us that he was a competitive table hockey player. We were stunned that he beat us all soundly since we thought we were fairly good. But obviously we were nothing compared to this guy.

This prompted me to find out more about table hockey. Low and behold, there were people that took this very seriously indeed! This eye opener quickly made my business partner Markus and I join a local table hockey club. Once I got settled in at the club and was taught some of the basics I realised that I had a certain skill for table hockey.

Even though I was rather old for a beginner I progressed at, what I felt was, a respectable pace and when after only six months I placed 51st out of 121 participants in Swedish Masters, causing a lot of people to congratulate me, I understood that I might really have something to contribute to the sport.

This season you are not only just a player, but also the main organizer of the Swedish Masters. How is the preparation for such the a big event? Why this tournament will be attractive for players?

Well, obviously Swedish Masters is a special thing for me. When I got the opportunity to be one of the organizers my answer was a resounding yes! Something that is quite exciting is that we have managed to get the top four placing players from the World championship to participate, including Edgars Caics, the current World champion, which gives this competition a uniquely high ranking point value.

In order to get a more lively event we have decided to host the closing party in the same venue after the final games have been played. As for music we have managed to book none other than Skurklandet, the creators of the song that everyone that ever played in a Swedish tournament know by heart:

There are some rumours about the old stars like Roni Nuttunen or Jacob Lindahl will make come back to play this SM. How much truth is that?

Although it would have been very inspiring to get either of them to appear as a contestant it did not turn out to be possible. I recently had the honour of meeting Roni in a couple of games in Turku, Finland. He is definitively still on top of his game and would likely do well indeed in any competition.

Who helps you in organizing SM?

Here I would like to give a special mention of my business partner and fellow table hockey enthusiast Markus Bengtsson. Although I might be a social person that have some skill for networking and building contacts, that would all come to nothing if he did not do all the heavy lifting, organizing stuff behind the scenes.

He is really the key to us pulling the Swedish Masters arrangement off, something that I can not stress enough! 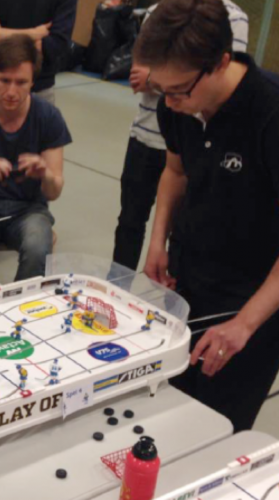 Mackan being highly focused on the intricacies of the game

Let’s back to your game. You played at World Championship this year, what were your memories?

To be honest I did not really see myself as a player fit for the World Championships but due to a number of lucky circumstances I ended up with a spot in the tournament. I was quite excited about getting this opportunity but also more than a little bit nervous about having anything to offer as a contestant against the level of players I was going to face.

I felt that I wanted to make the most out of this chance I had been given so I started studying the different teams and their players that we were going to face. I could see that the Russians were going to be toughest one and especially Alexei Titov. I then spent a lot of time methodically analysing games of his that were on Youtube, taking notes and thinking about counters to his tactics, eventually finding a particular weakness of his to exploit.

Assisted by this knowledge my teammate Joakim Lundin beat Titov in the Captains game that decided the outcome and won the Swedish team the gold medal. A victory that brought tears to my eyes, far exceeding what I had hoped for in the competition. When I went there I was happy just to participate and then I ended up becoming a world champion in the senior team category!

So can you share with us what did you see on that video?

The exact nature of it I will leave up to the observant player to deduce for oneself.

All right. What’s more do you remember from Liberec?

Another unforgettable moment is of course the seventh and last individual final between Maxim Borisov and Edgar Caics. Going into a long sudden death and then finally won by Caics, table hockey at its best! 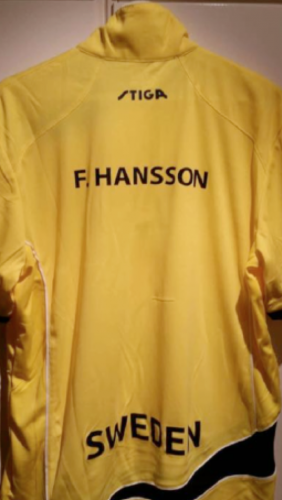 Fidde’s proud proof of participation in a really special event!

What would you like to change in table hockey nowadays?

Something that bothers me is the lack of consistency in the face offs. The ultimate solution would be to have referees doing them but I do not really see that as being practically doable, but still something should be done about it.

Another issue I see is the tendency to lock up the play when the puck is at the centre figure, dropping the pace of the game. I have heard an idea from Latvian players about introducing a time limit to when you have to act offensively once the puck is reachable by the centre, which I believe is sound thinking.

After the interview with Simon Thomas, the ITHF is seriously considering the idea of selling wild cards to the World Championships for 3000 euro. What is your opinion about that?

For me there is something problematic with allowing people to buy a place in a tournament. On the other hand there is the aspect that maybe the money can be put to good use by the table hockey association, but it seems to give an unfair advantage to someone just because they have a lot of money. I am inclined to think that if we are going to use wild cards it would be a better idea that they should be given to individuals that have made outstanding contributions to the sport as a token of appreciation.

Who are your favourite players in Sweden, and why?

For me it is an admirable quality, game wise, when a player has the ability to calmly and methodically analyse their failures in a game versus a given opponent in order to develop an effective counter tactic for their next meeting. Two Swedish names that come to mind for me in this regard are Hans Österman and Lars Henriksson, whom both are excellent tacticians!

Then you can also consider the more general aspects of being a member of the hockey table community, where even though they might not win the tournaments they still make a significant contribution to creating a generous and including environment. Two good examples would be Carl Bindekrans and Peter Östlund.

And in the World?

Internationally I must say that the top five or so worldwide players are really impressive in tactics.

Your biggest dream in life?

Answering this from a table hockey perspective I would have to say that getting some infra-red heating installed in the storage room where my hockey table got relocated to when the powers that be needed my former play room to house the sewing machine is pretty high up on the list. It is hard to play well when your fingers are numb from the cold! 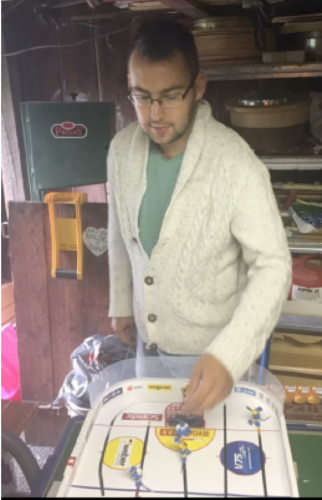 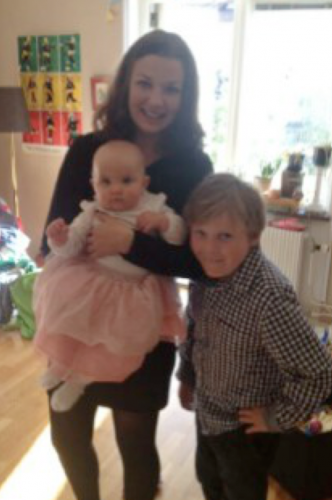 Thank you for the interview!

Thanks to you too! And I would also like to give a thank you to our loyal customer Andreas Emanuelsson for assisting in writing this down and proof.